The Dark Universe: A Panel of Horror Authors 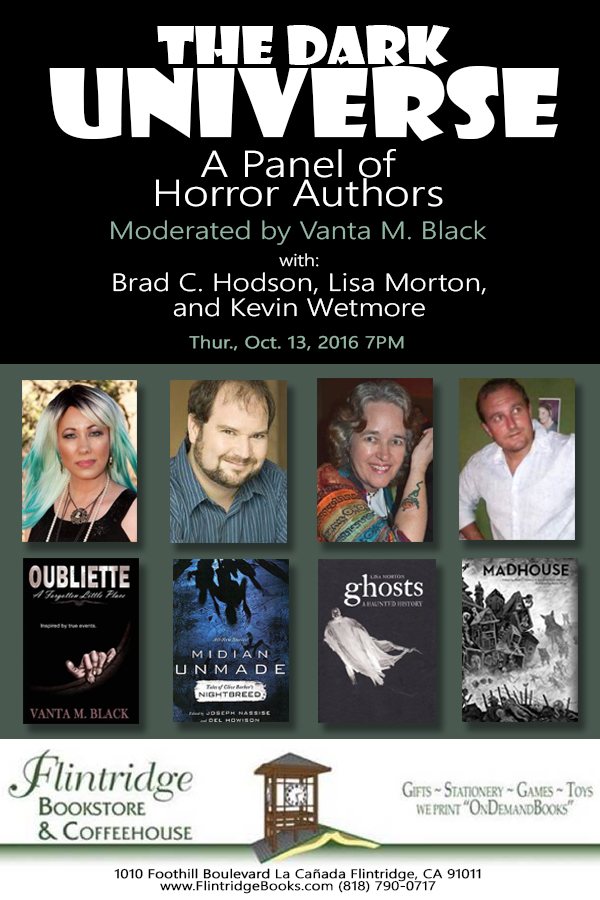 9/16/16 - La Cañada Flintridge, CA - In keeping with the Halloween spirit, on Thursday, October 13, at 7 P.M., Flintridge Bookstore & Coffeehouse presents a panel discussion, THE DARK UNIVERSE, featuring four Los Angeles area horror authors. The event is moderated by Vanta M. Black, who describes herself as an “explorer of the esoteric.” She is joined by novelist and screenwriter Brad C. Hodson; screenwriter and Halloween expert Lisa Morton; and actor, theater professor and comedian Kevin Wetmore. They share insights about their books and discuss horror/science fiction writing genres – with a Halloween twist to celebrate the season.

The French word oubliette refers to a pit where undesirables are thrown and left to die. Vanta M. Black started writing OUBLIETTE: A Forgotten Place after learning about the real one at haunted Leap Castle in Ireland. In Black’s book, her young protagonist Veronica experiences monsters that she knows are not “just in her head,” but no one listens as they tie her to a hospital bed every night. Years later after a nasty break-up and on the verge of bankruptcy, she takes a job at a castle in France. When the shadowy things that once terrorized her come back, Veronica must decide how much she’ll sacrifice for them, for her sanity, and for her life.

Black traveled extensively and spent ten years writing OUBLIETTE. Real paranormal accounts of elemental spirits, ghosts, sorcery and demons, plus actual historical events and legends, all feed into this masterfully-crafted narrative. Additionally, Blacks’ own encounters with entities known as “shadow people,” serve as the novel’s foundation. She resides in Southern California, but lives wherever her spirit moves her.

Edited by Brad C. Hodson and Bram Stoker Award winner Benjamin Kane Ethridge, MADHOUSE is a shared world anthology including sanity shattering tales by John Skipp, Jeff Strand, Scott Nicholson, Lisa Morton, and John Palisano. The book is tied together by Hodson’s and Ethridge’s chapter fiction. The insanity begins after a sandstorm traps everyone inside of Golden Canyon Psychiatric. A catatonic patient begins speaking for the first time, and everyone who hears him goes mad. Two staff members try desperately to hold onto reality while searching for the cause – and, hopefully, the cure – of the outbreak. The horrible truth is revealed bit by awful bit as the reader steps inside and finds out what it's truly like in the MADHOUSE.

Hodson has won the Roselle Lewis and Kornbluh awards for short stories and essays, respectively. He is also a screenwriter whose first novel DARLING is being adapted into a feature film. When not writing, Hodson is the Administrator for the Horror Writers Association.

"Called 'brisk, [and] handsomely illustrated' by the Times Literary Supplement, GHOSTS: A HAUNTED HISTORY by Lisa Morton wrangles together the most enduring ghosts into an entertaining and comprehensive look at what otherwise seems to always evade our eyes. In the history of the numinous there are few things more common than the belief in ghosts – from the earliest writings such as Epic of Gilgamesh to today’s ghost-hunting reality TV shows, ghosts have chilled the air of nearly every era and every culture in human history. Wide-ranging, informative, and slicked with sixty unearthly images, GHOSTS will delight anyone, whether they believe or not.

Morton is an award-winning author, screenwriter, and Halloween expert. She's currently co-editing (with Ellen Datlow) an anthology of all new Halloween fiction, HALLOWS' EVE, and serves as President of the Horror Writers Association.

Kevin Wetmore’s The Night Ray Bradbury Died is the third story in MIDIAN UNMADE: Tales of Clive Barker’s NIGHTBREED, edited by Stoker Award Winners (for Superior Achievement in Anthology and Horror) Joseph Nassise and Del Howison. In the book, the Nightbreed are driven from their city, Midian, their friends and family members slain before their eyes by monsters who become a mostly-hidden diaspora. Some are hunted; others, hunters. Some seek revenge. In a review on Wicked Horror, Michele Eggen writes, “Though dark, not every story is doom and gloom.” In Wetmore’s entry, “a Breed named Iblis meets a young girl whose face was disfigured by fire, and gains an understanding of her loneliness and pain, which is similar to his own.”

Wetmore is a Professor of Theatre Arts with expertise in Japanese, African, and Shakespearean theatre, Greek tragedy, stage combat, comedy, and horror cinema. He has degrees from Bates College, University of Leeds and University of Pittsburgh, where he received a Ph.D in Theatre and Performance Studies. He also has an M.A. in Theology from Loyola Marymount University.

The title of the bookstore’s panel, THE DARK UNIVERSE, is taken from the poem NEMESIS by H.P. Lovecraft (1890 – 1937), an American author who achieved posthumous fame through his influential works of horror fiction.